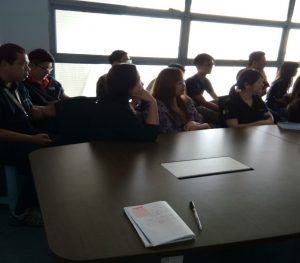 The visit was led by the RCE Coordinator and several members of the RCE Kuching Team who believed that this talk could kick-start the RCE’s efforts towards river cleanliness and sustainability by creating  awareness amongst the younger generation. Sarawak Rivers Board as one of the main RCE Kuching stakeholders is where, we are getting our rapport and support on kick starting RCE Kuching activities on Education for Sustainable Development and to meet its objectives since RCE Kuching is focusing on the Sarawak River Kiri (Left).

Rivers in the state of Sarawak play a major role in the economic activities.  They provide easy means of transportation for passengers and goods.  Rivers also provide fresh water for consumption, recreation and industrial use.  In some rural areas, boat services are the only means of public transport.

Public awareness on river cleanliness is where RCE Kuching  and Sarawak Rivers Board can consolidate efforts in educating the public towards a transformed attitude keeping the rivers clean through public engagement and participation.